One of the ways to make lobster more aesthetically pleasing and easier to eat is to butterfly the tail. This method isn’t just reserved for restaurants, you can do it in your own home! Through this lobster tail guide, you’ll learn how to properly store lobster, the step-by-step instructions for butterflying lobster tails, and the benefits of this practice.

What Does It Mean to Butterfly a Lobster Tail?

Though you’ve probably eaten lobster before, you may not know what it means to butterfly a lobster tail. Basically, it involves cracking open the hard top shell so the meat underneath can come through. As it cooks, the lobster meat will start to puff up over the shell. High-class restaurants love this showy presentation.

Not only does butterflying a lobster tail make it look more attractive on your dinner plate, but it also helps the meat cook evenly. Lobster tails in the butterfly style can be baked, broiled, roasted, or grilled, which offers flexibility. Whether you’re a barbecue master or you’re more comfortable cooking with the oven, your lobster tail will come out beautiful and thoroughly heated. It may seem like a complex method of preparation, but with these instructions, you’ll learn how to butterfly a lobster tail with ease.

Now you’re probably wondering, why do some people prefer lobster tails? After all, the entire lobster has tasty meat you could enjoy. Yet this preference extends from households to eating establishments, where you may see specials on lobster tails that are more expensive than whole lobsters! It doesn’t seem to make sense.

The truth is, the lobster tail is simple to prepare and highly satisfying. While buying a whole lobster may sound like less hassle on the surface, the cooking process creates a lot more mess. By the time you’re finished, your meal will be getting cold – and lobster isn’t something you want to pop in the microwave! Let’s face it: tails by themselves don’t require as much effort. Not to mention, if you’re squeamish, working with a live lobster in your kitchen may be too much for you to handle.

Even if you’re able to overcome that hurdle for the allure of a more substantial meal, you’ll just be disappointed. Most of the meat in a lobster’s body isn’t the greatest quality; the claws are good, but the best meat by far is in the tail. There’s a much larger quantity of it, and it’s incredibly delicious. On top of that, while other parts of a lobster are hard to deconstruct, you can easily pull the meat out of the tail with a fork. As you might imagine, butterflying lobster tails simplifies this even more!

Lobster tails should be fresh and raw for cooking. When you bring home frozen tails, thaw them in the refrigerator before you do anything with them. Much like live lobster, a lobster tail will keep in the refrigerator for 1-2 days, if it’s kept in a tightly covered container. However, if you want to save it for a special occasion in the future, you can place the tail in a heavy-duty freezer bag or airtight plastic container and put it in your freezer. Frozen, it will keep for up to 6 months.

Learn How to Butterfly a Lobster Tail

As we mentioned, before you begin the process of butterflying or cooking, the lobster tail should be at the right temperature. If it was just inside the freezer, make sure it defrosts completely so you can use it. In terms of cutting implements, you’ll need kitchen shears to get through the lobster’s thick shell.

Place the lobster tail shell side up on the table. Line up the bottom blade right under the shell, not within the meat itself. Hold the tail with one hand while you slowly cut down the center of the shell with the other. Continue cutting the upper-shell all the way to the base of the tail. Do not touch the tail fan or under-shell, they should be left attached and intact. If you don’t own kitchen shears, you’ll also be able to cut through the shell with a sharp knife, but be exceptionally careful so you don’t slice through the bottom of the shell.

The next step is opening the shell. Grab each side of the lobster shell with your thumbs and fingers to further spread the halves apart. You’ll need to be gentle when doing so, because you want to pry away the shell so it’s loose, but keep the back of the meat connected to the under-shell. After you’ve done this, the meat will be clearly visible.

Now you’re going to separate the meat. Press down with your thumbs and push the lobster meat apart with the shell halves. Then carefully tug the meat so it comes off the bottom shell, still keeping the back attached near the tail fan. Pull the meat upward, lay it on top of the shell, and squeeze the shell halves close together beneath it. Make a small slit in the top of the meat so you can continue to fold it over the shell.

Professionals recommend broiling your lobster tail after you butterfly it, but as we said above, baking, roasting, or grilling are solid choices as well. If you want to cut a few extra slits in the meat for presentation, go ahead. Otherwise, the lobster tail is ready to be brushed with butter and seasoned. Drizzle marinade over the tail before cooking, and consider using a wooden or metal skewer — inserted lengthwise — to keep the meat flat.

The heat from the stove or barbecue grill will cause the meat to puff up even further over the shell halves. About halfway through cooking, you can take out the lobster tail and baste it with more marinade to heighten the flavor. If you’re grilling the tail, the internal temperature of the meat should reach 135°F, while baked tails should be between 140 and 145°F. After cooking is complete, you can remove the skewer and the tail will remain flat. 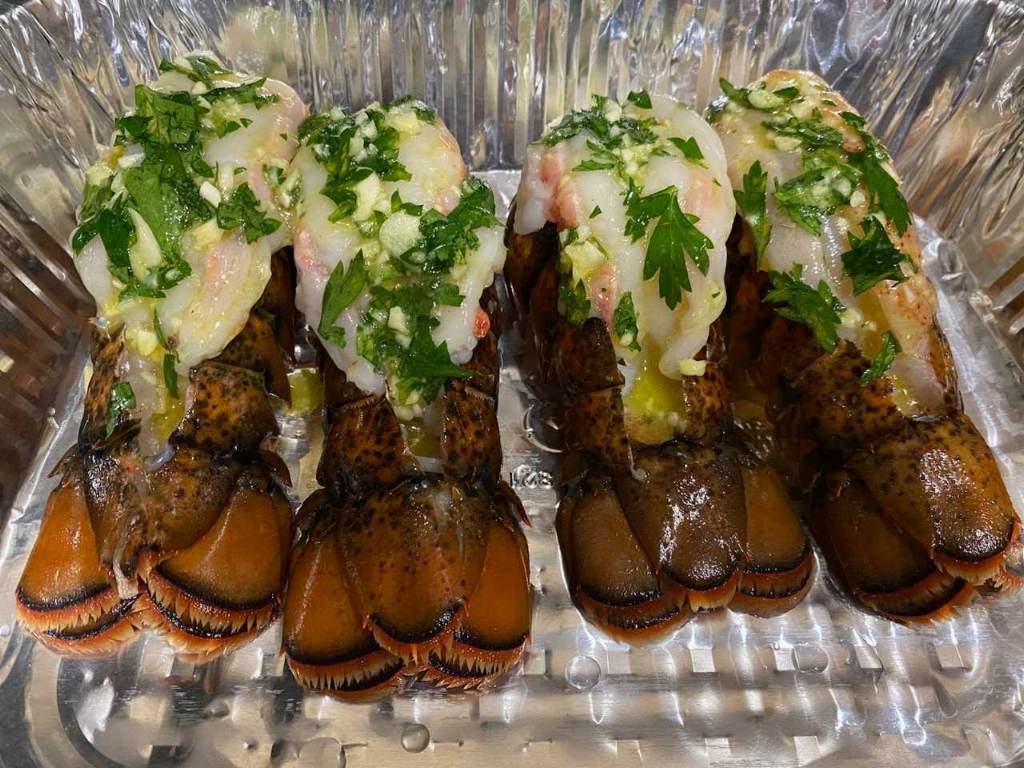